Tiny But Mighty: The Clitoris

Far down through the dense and deep forest thicket, into the canyon cleft, there is a rise.  Under that rise and hidden beneath a protective layer rests a silver pearl.  She is the princess, waiting to be awakened.

She is the clitoris, the tiny little secret, and the main organ of female sexual pleasure. No other quarter inch spot on a human body, male or female, is more tightly packed with nerve endings. The clitoris is intensely sensitive and capable of providing a woman with great sexual pleasure.  Because of her location on a woman’s body, the clitoris has no direct reproductive purpose, unlike a man’s penis.  Stimulation of the clitoris in the right way leads to female arousal and orgasm. 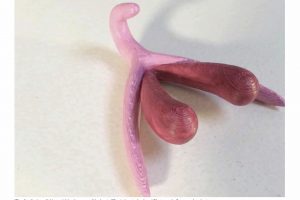 Outside the body the clitoris is tiny, but internally, it’s size rivals that of a man’s penis.  The clitoris and the penis share the same beginning.  Influential gender hormones determine whether the responsible cells will grow into a penis or a clitoris. Both organs are equally capable of providing it’s owner with great pleasure, but there remains huge differences between how each functions reproductively. This further causes misunderstandings about the clitoris.

Many men assume that the clitoris, or something similar resides inside a woman’s  vagina, causing intercourse to be equal in experience and pleasure for the female partner.  This is not so, and is proven when comparing to men the number of women who regularly orgasm during intercourse, which is about 100% to 30%.  For most women, intercourse does not lead to orgasm, because the clitoris is located outside their vaginas.  The clitoris’ purpose is pleasure, not reproduction.

The experience of pleasure a woman will feel when stimulated, despite the clitoris’ thousands of nerve endings, may still vary. When using a light with a dimmer switch, the brightness of a light will vary depending upon the setting of the dimmer.  Similarly, the sensitivity of the clitoris varies depending upon many factors. Negative attitudes towards sex, the presence of negative emotions, and preoccupying worries will all reduce a woman’s clitoral sensitivity.  If she has a busy mind, is unable to relax, or is feeling badly, her clitoral sensitivity may be “dimmed” or potentially even unresponsive. Stimulating an unaroused clitoris may cause a woman discomfort and interfere with her becoming aroused.

Unlike men, whose sexual response is more consistent because they are less influenced by their emotions, women’s responses may vary greatly.  The fickle nature of what kind of clitoral touch pleases a woman can be confusing to male partners. Being so small and changeable in its sensitivity, some partners are challenged to locate the clitoris and provide touch that is pleasing.

Giving your female partner intense pleasure is one way to show her love; her tiny but mighty clitoris is the way.  It is wise for a woman’s partner to be receptive to her gentle, but essential guidance and instructions, on how she likes to be touched, rubbed and stroked. It is a brave and kind woman who fosters her partner’s success by offering this guidance.  Andrew Aaron, LICSW